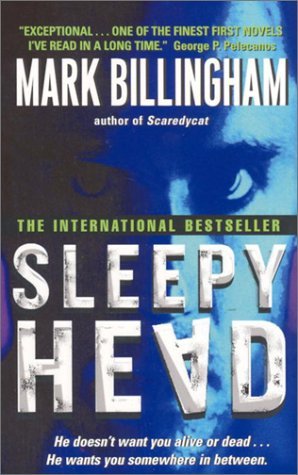 Sleepyhead is the first in the Tom Thorne series of books.  Written in 2001, it has been sitting on my Kindle since 2014.  When I first bought it, I picked it up quite quickly.  Then put it down again because all I could picture in my head was David Morrissey, who plays Thorne in the TV show.

Four years on, I didn’t do much better with that I have to say, which says something about the TV show’s impact on me I guess.  Thankfully, I couldn’t remember too much of the plot, which meant it was still a new story for me, well mostly because I remembered the basic premise.

In Sleepyhead, someone with medical training (maybe even a doctor) is attacking young women, pinching a particular nerve to cause a stroke.  He doesn’t want to kill them, though, but rather cause locked-in syndrome, where the women are completely aware of what is going on but can’t move, or speak, but are rather trapped in their own bodies.   END_OF_DOCUMENT_TOKEN_TO_BE_REPLACED

My Tweets
Note: I receive a small payment for purchases made through the amazon links at the end of posts. This does not impact my review of books - I will always say what I liked, loved and just didn't hit the mark. However, the payments help pay for me to buy more books - which is never a bad thing!
Back to top
Loading Comments...