So I know it’s not Monday but this post is linking in with Trish at Love, Laughter, and Insanity for Inspiration on Monday because I love the idea of getting to share a little bit of the rest of my life – including my recent attempts at do-it-myself skincare. If you are feeling creative or crafty, head over and share… 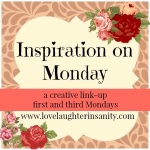 It seems everywhere you look on the internet and in magazines at the moment, someone is extolling the virtues of coconut oil. There is nothing, it seems, it can’t be used for, from cooking your tea to boosting your energy levels; helping you lose weight to being the cream in your coffee.

Its skin care benefits are some of the most often quoted and it was these that caught my eye as I have been slowly replacing my store-bought lotions and potions with home-made ones. So, always one to jump on a bandwagon and in need of a new night cream, I thought I’d give this wonder oil a go*

Initially, I used the oil neat. My skin did feel skin softer the next morning but I found that it didn’t absorb as well as I had hoped/expected. Marks on my pillow seemed to suggest a fair bit wasn’t absorbing at all. I don’t know if this is because of the type of oil I bought (though it was recommended for hair and skin) or if my skin isn’t dry enough to soak up the amount of oil I used.

Next, I tried cutting it. I use Sweet Almond Oil as a carrier for essential oils and have actually found it does a good job moisturising my skin when added to my bath. Liz Earle, who I am a huge fan of, recommends it in her book Skin Secrets. Sweet Almond oil contains vitamins E and D, is lightweight and doesn’t clog pores. It is also very mild so non-irritating for sensitive skin.

This worked much better. It felt lighter on my skin and absorbed much more quickly. Again, my skin felt softer on a morning and there was no marks on my pillow, suggesting more had been absorbed.

The only other issue I had was the smell. It smelt vaguely of coconut but only just. I must admit to liking my products to smell nice (although, strangely, I don’t like to wear perfumes). It makes them feel a little bit more special, so I added a favourite, lavender. This also seemed appropriate for a night cream as it helps you relax, unwind and get to sleep.

I’ve been using this “recipe” for about four weeks now and it seems to be working well…at least for me. I can’t say my wrinkles have disappeared (another claimed benefit) but it’s possible my skin is a little firmer, especially around the eyes, and no new lines have appeared so that can only be a good thing.

This should give you a two week supply.

As coconut oil is solid (hence me calling it cream), you will need to melt it before use. I simply put the mixing bowl I’m using in a slightly larger bowl of warm water and it melts in minutes with a little gentle stirring.

Once combined, put in an airtight jar and let solidify – this will take a couple of hours.

To use, take a pea sized amount, rub between your palms to melt then apply to your face as you would any other cream/lotion.

The next day, wake up looking 20 years younger 😉

*I say jump but it was more a cautious step. Because there was so much information out there it was hard to know what to believe so I made sure I read up on coconut oil on sites I know and trus before using it. The consensus on these was that whilst most claims are unproved it is known to be good for dry skin and has no known side effects when used as a moisturiser and the like.

My Tweets
Note: I receive a small payment for purchases made through the amazon links at the end of posts. This does not impact my review of books - I will always say what I liked, loved and just didn't hit the mark. However, the payments help pay for me to buy more books - which is never a bad thing!
Back to top
Loading Comments...