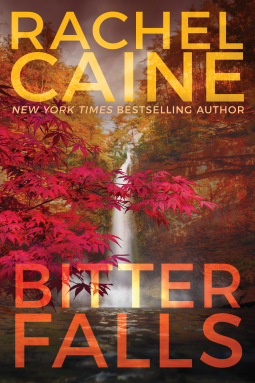 In spite of a harrowing past still haunting her, Gwen Proctor is trying to move forward. Until a new assignment gives her purpose: the cold-case disappearance of a young man in Tennessee. Three years missing, no clues. Just Ruth Landry, a tortured mother in limbo. Gwen understands what it’s like to worry about your children.

Gwen’s investigation unearths new suspects…and victims. As she follows each sinister lead, the implications of the mystery grow more disturbing. Because the closer Gwen gets, the closer she is to a threat that looms back home.

In a town that’s closed its ranks against Gwen; her partner, Sam; and her kids, there’s no bolder enemy than the Belldene family—paramilitary, criminal, powerful, and vengeful. As personal vendettas collide with Gwen’s investigation, she’s prepared to fight both battles. But is she prepared for the toll it could take on everyone she loves?

My thoughts on Bitter Falls by Rachel Caine

Despite having read all four Stillhouse Lake books, I was surprised how far along the series was when I picked up this book, probably because of how fresh they still fill – and how excited I am reading them. I still remember book one as clear as day (which is quite a feat considering how much crime fiction I read!).

What got me hooked was Gwen, a different type of protagonist, a woman on the run not from a man but from a whole host of them: men and women convinced she is guilty of the horrific crimes her husband actually committed. Thankfully, the husband is now out of the way. Unfortunately, this has done nothing to stop people hating Gwen and wanting her, and her kids, gone from their small, previously quiet, town.

Convincing Gwen to leave, however, won’t be easy. She has stubborn running through her core. This all changes when her job as a private investigator brings a case too close to home, and her children. A young man has gone missing, and those responsible are determined he won’t be found. To get to the bottom of the case, Gwen puts everything on the line and – for a while, at least – it looks like she might lose.

Rachel Caine does really well mixing Gwen’s story with that of the missing, tying them together in a way that doesn’t feel false or forced. For me, this is a plus because – as much as I want the case solved – I want to know more about Gwen and what is happening in her life. It might also be a bonus because, otherwise, the story of the missing young men might have been a bit too predictable, something I had read before.

Thankfully, though, this isn’t a route Rachel Caine went down and I was left more than satisfied with a great story, great characters, and killer ending.  I’m a very happy bunny!

Looking for More on Rachel Caine?