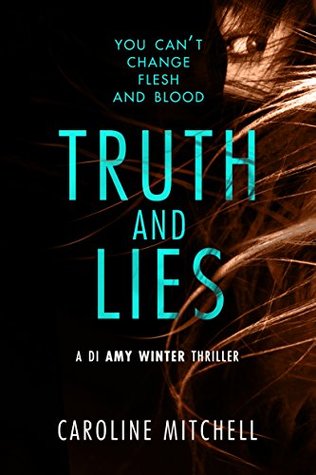 Grieving for her father, a respected Detective whose footsteps she’s followed, DI Amy Winter returns to work to a letter she could never have expected to receive.  It’s from a notorious serial killer, Lillian Grimes, who – along with her husband – was responsible for the death of numerous young girls offering to help her find the bodies of three victims whose graves are still unknown.

Normally, this is something Amy would jump at.  However, the letter contains more details than Amy can cope with, at least initially, because in it, Lillian claims to be Amy’s mother.  And that Amy isn’t Amy but Poppy.

While her first instinct is to ignore the letter, she can’t because she knows, on some level it’s true.  Plus, without her going to meet Lillian, there is no way that the graves will be found and the parents of the missing girls will never find peace.  So Amy goes to meet Lillian, despite the risks, and despite the fact that it will send her life into freefall, or at least that’s how it feels.

I felt bad for Amy reading Truth and Lies. What a way to find out you aren’t who you think you are.  And what a burden to carry – confront a past you don’t want to confront or leave grieving families in limbo.  As a dedicated officer, I understood she had no choice and I feared for her mental health as she embarked on her journey.  What I didn’t understand was why she kept it secret from her boss, especially when it could so easily have jeopardised the case.  It didn’t sit well with me and it didn’t seem realistic.

Which has left me in a quandary about this book.  On one level I loved it. I thought Amy was a great character, nice and complex and troubled, and I want to get to know her more.  On another, I struggled with how the story unfolded once the truth came out, which seemed a bit off if I’m honest.  Her boss’ behaviour just didn’t feel right, though it does set up a potentially complicated relationship in future books I guess so it might all fall into place then.

Would I recommend it? Yes, I would because I don’t think most people would be bothered the way I was about this element of the plot, and it isn’t a major one so it’s not the end of the world.  Who is it ideal for? Anyone who likes police procedurals and crime fiction with strong female characters.  If that sounds like you – enjoy!

DI Amy Winter is hoping to follow in the footsteps of her highly respected police officer father. But when a letter arrives from the prison cell of Lillian Grimes, one half of a notorious husband-and-wife serial-killer team, it contains a revelation that will tear her life apart.

Responsible for a string of heinous killings decades ago, Lillian is pure evil. A psychopathic murderer. And Amy’s biological mother. Now, she is ready to reveal the location of three of her victims—but only if Amy plays along with her twisted game.

While her fellow detectives frantically search for a young girl taken from her mother’s doorstep, Amy must confront her own dark past. Haunted by blurred memories of a sister who sacrificed herself to save her, Amy faces a race against time to uncover the missing bodies.

But what if, from behind bars, Grimes has been pulling the strings even tighter than Amy thought? And can she overcome her demons to prevent another murder?