Back in November last year, I did my first “Cleaning Up the TBR” post, something I first saw over on Fictionophile, who had seen it on Lost in a Story, and thought it was a really good idea. I know I’m not the only one who thought the same as I was seeing it everywhere so I am glad to jump on the bandwagon. Hopefully no one will mind 🙂

The idea is you take your Goodreads TBR list, sort by ascending date added, and look at the oldest five to ten items on your list. If you haven’t read them by now, are you likely to? Why or why not? If you want to keep them, make the case. This is my fifth visit to the list so far, with the last one in May. Here’s what’s next on the list…

Vanishing Girls by Lauren Oliver is first up, a book I can’t even remember adding.  Here’s what it’s about…

Dara and Nick used to be inseparable, but that was before the accident that left Dara’s beautiful face scarred and the two sisters totally estranged. When Dara vanishes on her birthday, Nick thinks Dara is just playing around. But another girl, nine-year-old Madeline Snow, has vanished, too, and Nick becomes increasingly convinced that the two disappearances are linked. Now Nick has to find her sister, before it’s too late.

Should it stay or should it go? I like the sound of it still so it stays. 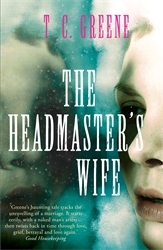 The Headmaster’s Wife by T. C. Greene is another book that doesn’t ring any bells at all, though I can see why I added it…

Arthur Winthrop is a middle-aged headmaster at an elite prep school in Vermont. When he is arrested for an act that is incredibly out of character, the strait-laced, married headmaster confesses to a much more serious crime.

Arthur reveals that he has had a passionate affair with a scholarship student called Betsy Pappas. But Betsy is a fickle and precocious teenager. When she switches her attentions to a classmate, Arthur’s passion for Betsy turns, by degrees, into something far darker. Now Arthur must tell the truth about what happened to Betsy. But can Arthur’s version of events be trusted – or is the reality much more complex and unnerving?

Should it stay or should it go? It goes, the reviews are middling and it just doesn’t make me want to rush out an buy it.

Your husband is dead. But he might not have been the man you thought he was…
She thought losing him was the worst thing that could happen.
She was wrong.
They tell her not to worry. Her sister, the police. They say it’s only natural, when someone close to you dies, to see him everywhere, sense him still nearby.
But they don’t know Zach like she does.
How much he loved her.
How he liked things just his way.
How far he would go to get revenge…

Should it stay or should it go? I think I would enjoy this book, though I don’t read as many of this style as I used to.  It stays.

Summer, 1914. Young Englishwoman Vivian Rose Spencer is in an ancient land, about to discover the Temple of Zeus, the call of adventure, and love. Thousands of miles away a twenty-year-old Pathan, Qayyum Gul, is learning about brotherhood and loyalty in the British Indian army. Summer, 1915. Viv has been separated from the man she loves; Qayyum has lost an eye at Ypres. They meet on a train to Peshawar, unaware that a connection is about to be forged between their lives – one that will reveal itself fifteen years later when anti-colonial resistance, an ancient artefact and a mysterious woman will bring them together again.

Hidden by Emma Kavanagh is a book I’ve owned forever….

Should it stay or should it go? As I own it, and I like Emma Kavanagh, it stays.

What do you think? Have I made the right decisions?