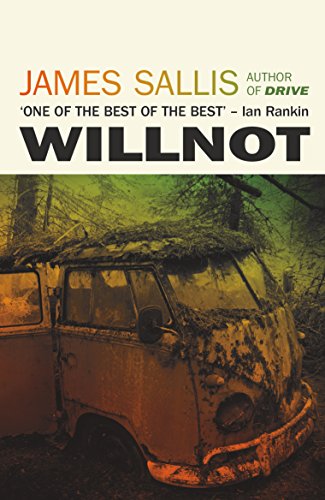 After my last unsuccessful experience with James Sallis (The Killer is Dying), I was slightly nervous picking up Willnot, especially as it was my choice for my first ever buddy read with Sarah over at Brainfluff. Thankfully, it looks like The Killer is Dying was a bit of a blip and, here, I got all the Sallis I could have hoped for – yay!

In his typical style, Sallis using words sparingly to paint a picture I found incredibly vivid.  I could picture the small town of Willnot and the people that lived there and I fell a little bit in love with the central character, Hale, a doctor come town ‘wise man’.  It’s his story that’s been told, but also the story of other people who live in Hale.  It’s all seems very simple on the surface, as life often is, but underneath there is plenty going on.

This is the thing I like best about Sallis, he lulls you into a false sense of security while hitting you over the head with a big old story, just never the story you expected.  It means reading his books is never a boring experience.  It’s also never a long experience. Sallis writes short books, and this one is no exception at 192 pages.  I always wish they were longer but, if they were, they probably wouldn’t be as tightly bound or half as good.  And this one was good, one I really enjoyed.

What did Sarah think?

As this is a buddy read, though, it’s not all about me.  I was interested to hear what Sarah had to say…

How far from your current reads was Willnot?

It was certainly interestingly different – but although I wouldn’t claim, these days, to be particularly widely read, the nature of the genres I read means that they cover a wide range of approaches and styles. And while Willnot isn’t a typical read for me – neither did it feel a million miles away from some of the sci fi/fantasy books I consume.

What were your thoughts in the first few pages / chapters?

I found the style highly readable and engrossing. The protagonist is immediately sympathetic and evidently a good man trying to do his best. I liked the detailed approach to his daily life and settled in for an entertaining tension between the easy-going, laidback style to the tension and danger of the impending whodunit that I was expecting to unfold.

Did those changes as you read the book?

Oh yes. For starters that whodunit – such as it was – never transpired to be remotely tense, although there was the danger. Which reared up and socked me between the eyes – before the overall gentle pace once more resumed. I do very much enjoy this style of writing – it’s one I think a handful of US writers have nailed, but I was a tad flummoxed in the manner in which that murder mystery was handled – and to be honest – I’m still not quite sure what to make of it.

What did you think of Sallis’ style, which is quite stripped back?

I love his writing style. The steady accretion of details and the ‘show don’t tell’ approach works really well, especially in the depiction of his characters and the pattern of daily life within this small community. It defines a particular type of American writing that can be traced right back through the last century. What did catch me unaware was his rather relaxed approach to the genre conventions of a murder mystery – which was what I thought I was going to be reading, and I’m not sure that I actually did…

To read her review, head over to her blog (which is one of my favourites).

More about the book…

In the woods outside the town of Willnot, the remains of several people have suddenly been discovered, unnerving the community and unsettling Hale, the town’s all-purpose general practitioner, surgeon, and town conscience. At the same time, Bobby Lowndes–his military records disappeared, being followed by the FBI–mysteriously reappears in his hometown, at Hale’s door. Over the ensuing months, the daily dramas Hale faces as he tends to his town and to his partner, Richard, collide with the inexplicable vagaries of life in Willnot. And when a gunshot aimed at Lowndes critically wounds Richard, Hale’s world is truly upended.

4 thoughts on “Willnot by James Sallis”