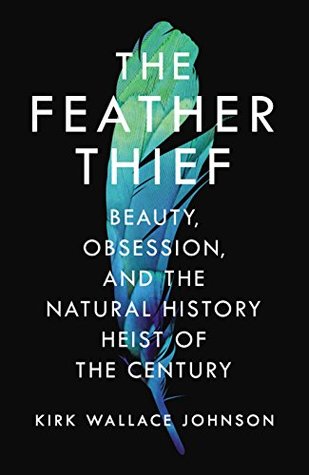 Non-fiction books are a wonderful way to learn more about the world and the people who live in it.  In The Feather Thief, I learnt more than I thought was possible about the world of fly-fishing, or more specifically fly-tiers who have a passion for Victorian fly tying designs and a commitment to recreating them.

It’s a passion that led to one man, Edwin Rist, breaking into the British Natural History Museum and steal over 200 rare birds specimens.  Scientists consider the specimens priceless.  And, while Rist said that the theft had nothing to do with money and was all about his art, he ended up making thousands of pounds from the brightly coloured feathers he harvested and sold on.

It’s an incredibly strange story and one I still haven’t completely gotten my head around – why someone would risk a prison sentence in order to make flies when they didn’t even fish.  The colour of the feathers and their rarity are the key.  As with many things in life, when people can’t have something, they focus on how much they need it rather than look for alternatives.

It’s also a fascinating story.  This is a community that doesn’t seem to welcome strangers easily and one that probably has a lot to hide. The trade in rare feathers is still going on, despite Rist being caught, and as not all the specimens Rist stole have been found, feathers from these birds are likely part of that trade.  How it works and how much money passes hands is hard to comprehend.

What it also is, is a story that doesn’t have a very satisfactory ending.  Johnson, who wrote the book was obsessed with Rist once he found out about the theft and spent years trying to track down the missing birds and confronting Rist about what he had done.  By the end, he’s met the man he has been obsessed with but is still on the hunt for the birds and their feathers.

Not knowing what has happened to them, and that we might never know, left me feeling frustrated.  In part, I think because that is what the book felt like it was leading up to, a happy ending.  It left me disappointed and it’s coloured my opinion of the book if I’m honest.  The first two thirds, I loved.  I was completely engrossed and I couldn’t put the book down.  The last third left me flat.

I should say this has nothing to do with Johnson’s writing, which had a conversational style I enjoy.  It was just the story and how it ended.  A shame really, but there you go.

Who is Edwin Rist?

Genius or Narcissist? Mastermind or Pawn?

One summer evening in 2009, twenty-year-old musical prodigy Edwin Rist broke into the British Museum of Natural History. Hours later, he slipped away with a suitcase full of rare bird specimens collected over the centuries from across the world, all featuring a dazzling array of priceless feathers.

Kirk Wallace Johnson was waist-deep in a river in New Mexico when he first heard about the heist, from his fly-fishing guide. When he discovered that the thief evaded prison, and that half the birds were never recovered, Johnson embarked upon a years-long worldwide investigation which led him deep into the fiercely secretive underground community obsessed with the Victorian art of salmon fly-tying.

8 thoughts on “The Feather Thief by Kirk W. Johnson”