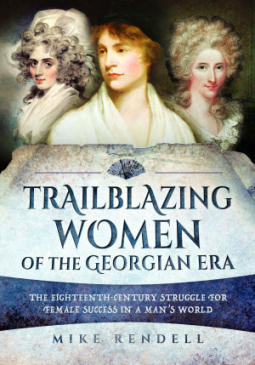 When I read Queens of Georgian Britain by Catherine Curzon last year, it made me realise how little I knew about the era and how I wanted to know more.  This book was my attempt to do that – or at least start too!

Trailblazing Women is a great taster book, one that has introduced me to a whole raft of women I now want to know more about.  Broken up into sections for the arts, finance, science, and education which feature a chapter on three or four strong, capable, and fascinating women (in some cases), you don’t get a lot of information on any of them.  But you do get enough to whet your appetite to find out more.

Mike Rendell does a good job of pulling out the key facts, interspersed with snippets of gossip about their lives which showed how hard some of them had to fight to have their voices heard.  What I also found interesting is how most didn’t do so to progress the rights of women, but were focused on getting their own voices heard.

The book itself has a conversational style, one I’ve noted with other books by Pen & Sword, and so it’s easy to fall into reading it.  I read quite a lot of history books and most are so detailed they can feel overwhelming. This doesn’t and, as I said earlier, is a great introduction to a subject.  It won’t fill in all the gaps or answer all the questions you might have but it’s a great starting point.

Trailblazing Women of the Georgian Era offers a fascinating insight into the world of female inequality in the Eighteenth Century. It looks at the reasons for that inequality – the legal barriers, the lack of education, the prejudices and misconceptions held by men – and also examines the reluctance of women to compete on an equal footing. Why did so many women accept that ‘a woman’s place was in the home’? Using seventeen case studies of women who succeeded despite all the barriers and opposition, the author asks why, in the light of their success, so little progress was made in the Victorian era.

Representing women from all walks of life; artists, business women, philanthropists, inventors and industrialists, the book examines the way that the Quaker movement, with its doctrine of equality between men and women, spawned so many successful businesses and helped propel women to the forefront. In the 225 years since the publication of Mary Wollstonecraft’s A Vindication of the Rights of Woman, questions remain as to why those noble ideas about equality were left to founder during the Victorian era? And why are there still so many areas where, for historical reasons, equality is still a mirage?

Note: I received this book in return for a fair and honest review.  All thoughts, feelings and opinions are my own.