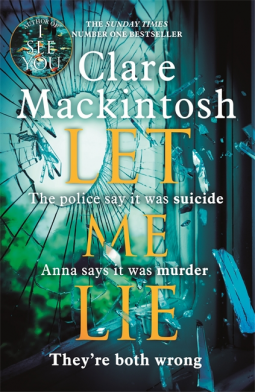 Let Me Lie is another book by Clare Mackintosh that is hard to describe because one wrong word and you let out a plot twist – and possibly spoil the book for anyone who hasn’t read it.

It starts with Anna, home with her eight year old daughter Ella and mourning the loss of her mother a year earlier and her father seven months before that.  Both committed suicide, jumping off the cliffs at Beachy Head.

Or, at least the police and coroner say they committed suicide; Anna isn’t so sure and, when a card telling her to think again turns up on her doorstep, she becomes convinced her parents were murdered. Now, to persuade the police.

Enter Murray, a retired police officer who now works as a civilian. When Anna turns up at the station, upset and scared, he decides to look into her parents deaths and see if there is any truth in what she says. What he finds is not just the truth but a whole world of lies that puts Anna and Ella in danger.

Of all the characters in this book, Murray was my favourite.  He is so well drawn, so warm and welcoming and just a little bit sad, taking care of his wife who has severe mental health problems and unsure of his place in the world now that he’s retired.

I looked forward to the chapters where he was front and centre, which alternating with Anna’s, wanting to know how his story played out beyond the mystery of Anna’s parents.  It is one of the things I like about Mackintosh’s novels – her ability to make you believe in her characters, even if you have to suspend belief a little bit when the plot gets a bit silly, which it did a couple of times here I have to admit.

Anna was harder to like.  I could understand how and why she behaved but I found it hard to believe how naive she was at times.  That’s an ongoing issue with me in this genre so nothing against Mackintosh.  I know it’s needed for the plot but I can’t help but get a bit wound up by it and. To give Mackintosh her due though, she does seem to play with the genre “standards” here, making me think the story was going in one direction when it was actually going in another.

There is a nice balance between Murray and Anna’s voices, plus another which helps slowly bring out the secrets her parents were hiding.  I do love a book with secrets, and here Mackintosh is in a league of her own.  This is her third book and the third I’ve read and each one has had a twist that has made me realise I was reading the book one way when it was actually telling me a different story if I’d just been looking closely enough.

It’s why her first book is still one of my favourite books and one I still flash back to and why I am a firm fan, one who is looking forward to her next book already.  Loved this!

The police say it was suicide.
Anna says it was murder.
They’re both wrong.

One year ago, Caroline Johnson chose to end her life brutally: a shocking suicide planned to match that of her husband just months before. Their daughter, Anna, has struggled to come to terms with their loss ever since.

Now with a young baby of her own, Anna misses her mother more than ever and starts to question her parents’ deaths. But by digging up their past, she’ll put her future in danger. Sometimes it’s safer to let things lie…

15 thoughts on “Let Me Lie by Clare Mackintosh”