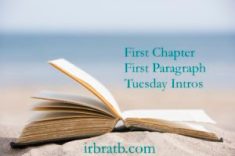 Once again I’m linking up again with Vicky at I’d Rather Be At The Beach who hosts a post every Tuesday for people to share the first chapter/paragraph of the book they are reading, or thinking of reading soon.

This week, I’m planning on starting Willnot by James Sallis as part of a buddy read but also to – hopefully – regain my faith in one of my favourite authors after a not so great read of one of his books a few weeks ago.  Here’s what it’s about…

In the woods outside the town of Willnot, the remains of several people have been discovered, unnerving the community and unsettling Dr Lamar Hale, the town’s all-purpose general practitioner, surgeon and town conscience.

At the same time, Bobby Lowndes – his military records missing, and followed by the FBI – mysteriously reappears in his hometown, at Hale’s door. Over the ensuing months, the daily dramas Hale faces as he tends to his town and to his partner, Richard, collide with the inexplicable vagaries of life in Willnot. And when a gunshot aimed at Lowndes critically wounds Richard, Hale’s world is truly upended.

“We found the bodies two miles outside town, near the old gravel pit.  Tom Bales was out on an early-morning hunt when his dog Mattie dropped the quail she was retrieving, sprinted to a stretch of worried earth, and wouldn’t budge.  He’d call, she’d start toward him and circle right back, barking.  It was the smell that got him finally, when he walked over.  Mushroomy, dark. Cellarlike.”

What do you think – would you keep reading?