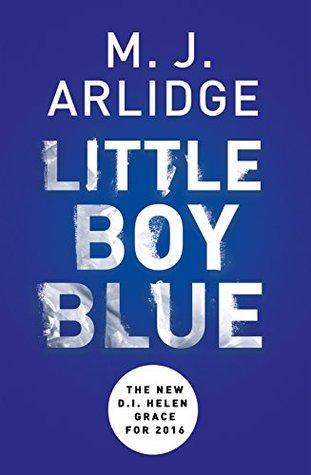 I had one word to say after finishing Little Boy Blue – “Wow!”  I’m a huge fan of the series staring Detective Helen Grace anyway but this, for me, has been the best book yet.

Why?  It started off with the murder of a recurring character in a pretty horrific way (not graphic in the blood and guts way but just in a way which must have been terrifying).

He’s someone Helen knows, though the rest of the team aren’t aware, and she does her best to keep it secret.  With a dogged reporter on her case, it’s not that easy though, and it sets her on edge – effecting her relationship with her team (a relationship that tends to be tense anyway as Helen is not the easiest person to work with).

Most affected is Charlie, her friend as well as colleague, and someone Helen could really do with in her corner as more bodies turn up of more people Helen knows.  The question is, is it a coincidence or is the killer trying to send a message (and if they are, what are they trying to say?).

As for the killer, there are plenty of suspects, meaning plenty of red herrings to keep you guessing.  I loved that the suspects here were so well drawn, as are all the main characters.  With each book they become more real and more solid (saying that, you could read this on it’s own, but given how good the series is I would recommend going back to the beginning).

The other thing I loved was that the story unfolded slowly.  There has been an almost frantic pace to previous books and this was a change up, which was nice to read.  It felt a bit like a dripping tap with each drip being a little more evidence building up and things looking a little bit worse for Helen.  It made for a tense read.

And then we got to the end, which I had a horrible feeling about, but still shocked me when it happened.  M. J. Arlidge is very, very, clever and this is a brilliant book. Loved it!

In the darkest corners of the city, there is a thriving nightlife where people can let loose and cross the lines of work and play, of pleasure and pain. But now that sanctuary has been breached. A killer has struck and a man is dead.

In a world where disguises and discretion are the norm, one admission could unravel a life. No one wants to come forward to say what they saw or what they know—including the woman heading the investigation: Detective Helen Grace.

Helen knew the victim. And the victim knew her—better than anyone else. And when the murderer strikes again, Helen must decide how many more lines she’s willing to cross to bring in a devious and elusive serial killer…