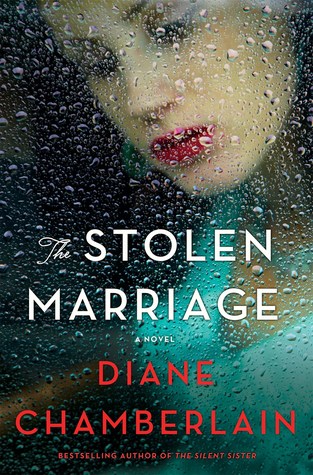 I think I may have to change the layout of my posts, or stop using goodreads to get the “blurbs” as reading the one for The Stolen Marriage, you might as well not read the book because it gives so much away.  So, like with Cold Blood a few weeks ago, I am putting the summary at the bottom of the post – read it if you would like but, for me there, was too much included and too much given away for a plot that had be hanging to the edge of the page all the way through the book.

It’s why I love Diane Chamberlain books so much – she tells tales that are complex and complicated and that I can’t put down.  And, yet again, she hasn’t disappointed me.  In fact, this – for me – was one of the best books of hers I feel like I’ve read in a while and, as I’ve liked everything of hers I’ve ever read, that is saying something.

Why did I enjoy it so much?  First off, the characters.  Central to the story are Tess – a young woman of Italian heritage who has grown up sheltered and certain of the path her life would take – and Henry, the man Tess marries – who is an enigma through most of the book.  He has secrets he can’t share that could mean he’s very good at pretending to be good or is just plain bad.  I decided early on that he wasn’t bad and prayed for the rest of the book I was proved right (you’ll have to read The Stolen Marriage to find out if I was!).

Both Tess and Henry as so well written and so detailed and complex, I believed in them totally, and in all the characters that surrounded them, including Tess’ former fiancé and Henry’s family.  Set in 1944, their behaviours weren’t always one I understood but they felt right for the time and showed just how difficult it is to be yourself in a world and in a society where social mores ruled how everyone (or nearly everyone) behaved.

Then there is the setting – Hickory, a small town in the south, where Baltimore born Tess struggles to fit in, not only for her Italian roots which make her stand out but also because she is one of “those” women, one who wants to be independent – to have her own opinions and (dare I say it) work.  I found out after reading the book Hickory was a real place which Chamberlain had visited and it shows in the way she describes the town, it’s people and it’s places.

The polio outbreak, which is central to the story, is also a real event – one that took place in Hickory – and this is the third reason I loved this book.  It was something I knew nothing about and not only was it interesting for the history buff in me, it also made for an interesting story, one that allowed Tess and Henry’s relationship to change as the book progressed and created a catalyst for what happened to them.

For me, it made for a compelling read, one – as I said at the beginning – I couldn’t put down.  I really can’t find a thing bad to say about it.  I loved it from the first page to the last and can’t recommend it enough.

In 1944, twenty-three-year-old Tess DeMello abruptly ends her engagement to the love of her life when she marries a mysterious stranger and moves to Hickory, North Carolina, a small town struggling with racial tension and the hardships imposed by World War II. Tess’s new husband, Henry Kraft, is a secretive man who often stays out all night, hides money from his new wife, and shows no interest in making love. Tess quickly realizes she’s trapped in a strange and loveless marriage with no way out.

The people of Hickory love and respect Henry and see Tess as an outsider, treating her with suspicion and disdain, especially after one of the town’s prominent citizens dies in a terrible accident and Tess is blamed. Tess suspects people are talking about her, plotting behind her back, and following her as she walks around town. What does everyone know about Henry that she does not? Feeling alone and adrift, Tess turns to the one person who seems to understand her, a local medium who gives her hope but seems to know more than he’s letting on.

When a sudden polio epidemic strikes the town, the townspeople band together to build a polio hospital. Tess, who has a nursing degree, bucks Henry’s wishes and begins to work at the hospital, finding meaning in nursing the young victims. Yet at home, Henry’s actions grow more alarming by the day. As Tess works to save the lives of her patients, can she untangle her husband’s mysterious behaviour and save her own life?

Note: I received a copy of this book in return for a fair and honest review.  All thoughts, feelings and opinions are my own

13 thoughts on “The Stolen Marriage by Diane Chamberlain”