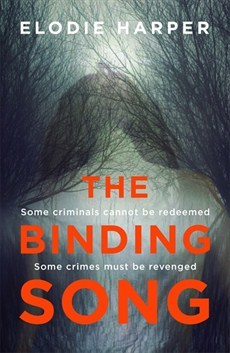 Dr Janet Palmer is the new lead psychologist at HMP Halvergate in a remote, bleak area of Norfolk. At first, she was excited by the promotion. Then she starts to see how many secrets are hiding behind the high walls.

A string of inmates have committed suicide, leaving no reasons why, and her predecessor has disappeared – along with his notes. The staff are hostile, the threat of violence is ever-present, and there are rumours of an eyeless woman stalking the corridors, punishing the inmates for their sins.

Janet is determined to find out what is really going on. But the longer she stays and the deeper she digs, the more uncertain she feels.

Halvergate is haunted by something. But it may be a terror worse than ghosts…

First off, and shallow as it may sound, I have to say that I think the cover of The Binding Song is one of my favourites this year.  It is so simple yet says all it needs to about a book that is spooky and scary and right up my alley.  It’s what drew me to it (see I said I was shallow) so thank you to whoever designed it because what was inside the pages was a great read and an excellent debut.

It starts as it means to go on, with a man on the run, making his way through the woods in the dead of night and scared of his own shadow…as well as the shadow of someone else, the woman who has been haunting his dreams, urging him to kill himself – which he kindly obliges her by doing.  It’s a great opening, one that had me hooked. The man, it turns out, is a rapist who recently escaped from a secure unit.  He is one of several who have killed themselves whilst in prison, all after seeing a woman in their dreams.  Newly arrived, Dr. Janet Palmer believes it is group psychosis of some type, though it’s hard for her to say as her predecessors notes have all disappeared (as has he) and prison authorities seem to be either oblivious to the deaths or purposefully obstructing her investigations.

Whatever the case, Palmer is determined to discover the truth, helped only by the prison Chaplin, a man who may believe in God but doesn’t believe in anything else otherworldly.  It’s a truth that gets murkier the closer to it she gets, especially when she starts to see the mysterious woman too and finds her dreams invaded.  All this happens slowly, slowly, allowing the tension to build.

It’s all happening in a perfect setting too – a remote part of Norfolk in winter and a secure prison unit. Harper uses it to good effect, almost turning the location into a character in it’s own right. What could be better for a story that is part thriller, part horror and (one of my favourite genres) part ghost story?  There is lots going bump in the night and I loved it.  For me, Harper is one to watch out for and I can’t wait to see what she does next.

10 thoughts on “The Binding Song by Elodie Harper”