Anyone who spends any time on my blog will know that I am more than a little excited about my upcoming holidays, half of which will be spent in California, one of my favourite holiday destinations.  Slowly but surely, my hubbie and I are working our way around the state and, this time, I get to visit San Francisco for the first time which I am really looking forward to.

In honour of our upcoming trip, I thought it might be fun to share my five favourite books set in California…

Claire DeWitt and the Bohemian Highway by Sara Gran is first up because I have never met a detective like her, or rather private investigator, as she lays waste to the seedier side of San Francisco. Given my favourite genre is crime fiction, I meet a lot of dysfunctional female characters, ones whose lives have gone off the rails at some point and who struggle to keep it on track but Claire does it with a sense of humour and a don’t care attitude I found refreshing. I can’t wait to read more of this series.

Then there is This Book Will Save Your Life by A. M. Homes because who can’t resist a book with doughnuts on the cover? It makes sense too because a lot of this is set in a doughnut shop as an LA overachiever finds himself lost and trying to re-evaluate his life when he realises he is alone and unloved. It all sounds a bit depressing but it isn’t. A. M. Homes has a wicked sense of humour, black and biting, that had me laughing out loud and caring for characters I really shouldn’t have.

There isn’t much humour in Less Than Zero by Brett Easton Ellis, which I re-read not so long ago and which, whilst I didn’t find it anywhere near as shocking or engrossing as I remembered from the first time round, I still really enjoyed (if that’s the right word for a book with so many unlikeable characters). It did feel very much of it’s time, the hedonistic early 80s, with its take of the drug fuelled excesses of the young and the rich.  I remember how oddly glamorous a lot of it seemed at the time despite how nasty the world (and people) actually being portrayed. 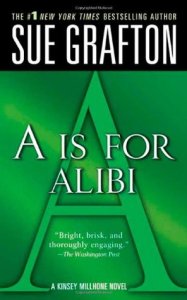 A world I think I’m much best suited too, despite the tendency for people to end up dead, is that of Kinsey Millhone.  Technically, this might be a cheat as there is a whole series of books here, starting with A is for Alibi and ending (for now) with the recently released Y is for Yesterday.  Set in the fictional Santa Teresa but based on Santa Barbara, if I was the type to exercise I would see myself running along the beach with Kinsey, enjoying the seemingly never ending sunny days.

Rounding out my list is a book I read last year and which made it instantly into one of my all time favourite reads.  I can’t stop recommending it and I haven’t stopped buying it as a gift.  It’s The Girls by Emma Cline, which takes me roughly back to where I started location wise with it’s Northern Californian setting.  This fictional account of life in a manson like cult was not only fascinating but also beautifully written.

And that’s it for me, though there are others that probably deserve an honourable mention like anything by Raymond Chandler and Steinbeck (they just didn’t jump front and centre when I was thinking of this list).  What else have I missed – there is room in my kindle for books I should be reading?

This post is part of the 2017 Book Blog Discussion Challenge, linking in with Nicole at Feed Your Fiction Addiction and Shannon at It Start’s at Midnight.