Once again I’m linking up again with Diane at Bibliophile by the Sea who hosts a post every Tuesday for people to share the first chapter / paragraph of the book they are reading, or thinking of reading soon. In really enjoy these tasters when I read them on other blogs so wanted to join in.

This week, I’m reading the oldest book on my Kindle (part of a personal challenge I wrote about here). I’m a little way in and not sure how I feel. I normally love Nordic Noir, which this is, but it’s also very long and very wordy…we’ll see I guess. Here’s what it’s about… 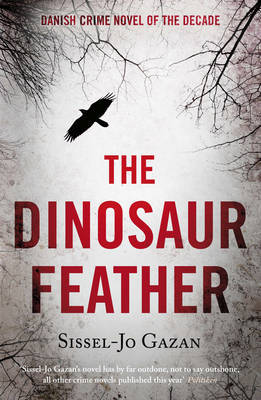 How could one man inspire such hatred?

Professor Lars Helland is found at his desk with his tongue lying in his lap. A violent fit has caused him to bite through it in his death throes. A sad but simple end. Until the autopsy results come through.

The true cause of his death – the slow, systematic and terrible destruction of a man – leaves the police at a loss. And when a second member of Helland’s department disappears, their attention turns to a postgraduate student named Anna. She’s a single mother, angry with the world, desperate to finish her degree. Would she really jeopardise everything by killing her supervisor?

As the police investigate the most brutal and calculated case they’ve ever known, Anna must fight her own demons, prove her innocence and avoid becoming the killer’s next victim.

Anna Bella Nor was dreaming she had unearthed Archaeopteryx, the earliest and most primitive bird known. The excavation was in its sixth week, a fine layer of soil had long since embedded itself into everyone’s faces and the mood had hit rock bottom. Friedemann von Molsen, the leader of the excavation, was the only one still in high spirits. Every morning when Anna staggered out of her tent, sleepy and shivering in the cold, von Molsen would be sitting by the fire, drinking coffee; the congealed porridge in the pot proving he had cooked and eaten his breakfast long ago. Anna was fed up with porridge, fed up with dirt, fed up with kneeling on the ground that only revealed bones that were, of course, interesting in their own right, but were too young to be the reason she studied biology, and most definitely not the reason she was spending six weeks of her precious summer holiday living in such miserable conditions. The year was 1877 and, at this point in her dream, Anna got the distinct feeling that something didn’t add up. She was wearing her quilted army jacket and thick furry boots with rubber soles, but Friedemann von Molsen didn’t seem the least surprised, even though he was wearing a three-piece corduroy suit with a pocket watch, a woolly cap, which rested on his ears, and had a pipe in his mouth.

23 thoughts on “Tuesday intro: The Dinosaur Feather by Sissel-Jo Gazan”