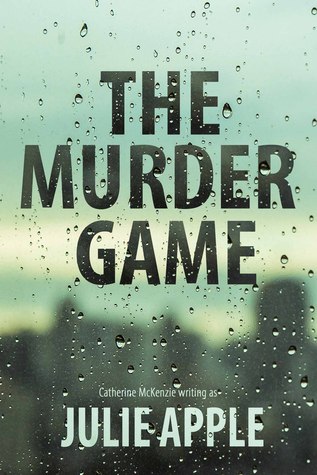 Ten years working as a prosecutor have left Meredith Delay jaded and unsure of what she wants out of life. She’s good at her job, but it haunts her. Her boyfriend wants her to commit, but she keeps him at arm’s length. Then Meredith is assigned to a high-profile prosecution involving the violent murder of a fallen hockey star. At first, it appears to be just another case to work. But when her old friend Julian is accused of the murder, it takes on a whole new dimension.

Meredith, Julian, Jonathan, and Lily were a tight-knit group in law school. But now, Jonathan’s defending Julian, and Lily’s loyalties aren’t clear. And when Julian invokes a rare—and risky—defence, Meredith is forced to confront their past.

Has something they played at as students finally been brought to death?

So, for those who aren’t already aware, Julie Apple is the pseudonym of Catherine McKenzie, who happens to be one of my favourite authors, and The Murder Game is a book written by one of her characters (the same Julie Apple) in the book Fractured.

In Fractured, The Murder Game is a huge hit.  It is about a group of law students who play at planning murder.  Then a fellow student is murdered. The question is just how much did the students know – did they manage to plan a perfect murder after all?  Although a work of fiction, there was a death at Julie’s college and so fans and critics alike want to know just how much of her book was real, just how involved she was in the murder of a fellow student.  And by the end of Fractured, you, the reader, are also wondering just where the truth lies.

At no point, though, do you get to read the book or find out a huge amount about it (Fractured is more about Julie fitting into a new neighbourhood and running from her past).  And you don’t here, at least not quite – because the murder victim isn’t a college student but a former hockey star, one convicted of molesting a child.  The killer, though, is one of a group of law students, a group of four who sat around planning just how they would kill someone and get away with it.

The students are Meredith, the central character and whose voice you hear throughout as she is also the story teller; Julian, the killer who owns up to the murder and finds himself on trial; Lily, his sometimes girlfriend who has an IQ of 164 and strives for perfection in all things; and Jonathan, Meredith’s on again / off again boyfriend and Julian’s defence attorney.  As characters, all four are fascinating to read about and get to know.

They are so well drawn that I felt I knew them….and disliked them, even Meredith who felt like the underdog, the odd one out and the one I should be rooting for (especially as she was looking to put her friend away for murder).  Whilst I did at first, slowly, through flashbacks to their college years, I started to realise maybe she wasn’t as innocent as she first appeared. She has a darker side, one that makes her more interesting but definitely less likeable.  Or maybe that darker side was more about her not being confident in herself, which meant she was easily led and I should feel more sympathy for her.  Throughout the book, right till the end, I went back and forth and am still not sure how I feel about her.

It’s one of the things I love about Catherine McKenzie – she creates complicated people that seem to leap out of the page.  And it wasn’t just Meredith, it was all four characters,  Each had so many quirks and character flaws, so many things that might make you love or hate them – that made you wonder if their behaviour was because they were young or spoilt or just too bright for their own good or if they were fundamentally flawed as human beings.  Again, I went back and forth throughout the book about how I felt.

For me, the flashback scenes were the best as I felt I was getting to know each of them more and I had the chance to put the pieces together, figure out if it was a game or just a coincidence that they had all ended up where they had, in a courtroom facing off against each other.  The whether Julian was guilty of not, which took place mainly in the courtroom, was almost secondary (though probably shouldn’t have been).  I wanted to know how they had gotten there and why.  Plus, if I’m honest, I am not the biggest fan of courtroom dramas and so these bits, which lots of questioning of witnesses and the stand aren’t something I normally enjoy reading.  Not enough action.

Thankfully I got the action in the college scenes and the chapters on Meredith’s life, which kept me more than satisfied.  And I learnt something about the Canadian legal system, and a little learning is never a bad thing.  I also got a great story with plenty of twists, turns and red herrings  – things that kept me guessing.  It wasn’t my favourite Catherine McKenzie book but it was still a really good one.  I liked this a lot – a recommended read!

10 thoughts on “The Murder Game by Julie Apple”