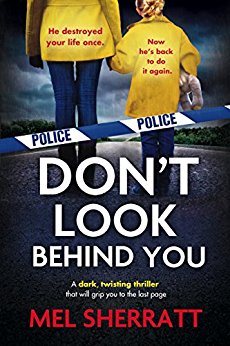 She got into bed but sleep didn’t come easily. Every creak in the house made her alert. She was waiting for him to come and get her.

The small city of Stockleigh is in shock as three women are brutally attacked within days of each other. Are they random acts of violence or is there a link between the victims? For Detective Eden Berrisford, it’s her most chilling case yet.

The investigation leads Eden to cross paths with Carla, a woman trying to rebuild her life after her marriage to a cruel and abusive man ended in unimaginable tragedy. Her husband Ryan was imprisoned for his crimes but, now he’s out and coming for her.

As Eden starts to close in on the attacker, she also puts herself in grave danger. Can she stop him before he strikes again? And can Carla, terrified for her life, save herself – before the past wreaks a terrible revenge?

So I want to start this review not with an overview of the story but with a comment on the tagline “He destroyed your life once. Now he’s back to do it again.” because I don’t think it – or the overview above – do this book justice.  They suggest this is the story of one woman at risk from one man, a popular theme in the books I read at the moment and I have to say that it caught my eye when requesting.  These books tend to follow a pattern though that Don’t Look Behind You doesn’t, which for me was a welcome change and a nice surprise.

What it is does have in common with other books is men’s behaviour towards women, how it can often be violent and how abuse isn’t always physical but emotional, with the effects lasting long after the violence stops or a relationship ends.  It’s a powerful topic that leads to a powerful book, one that doesn’t just entertain as a police procedural / piece of crime writing but makes you pause and think about how much more commonplace attacks on women, by strangers as partners, might be and how hard it is for them to stay safe and live full lives afterwards, lives not shrouded in fear.

Sherratt shows it here with two stories running side by side. The first is Detective Eden Berrisford’s search for a man attacking young women on their way home at night; the attacks are escalating and she needs to figure out who is responsible before someone ends up dead. The second focuses on Carla, who works at a women’s refuge but is also in hiding from her ex-husband Ryan, recently released from prison and out for revenge, blaming her for putting him there despite the fact that he had nearly killed her before he was arrested.

Both stories are compelling and well plotted, alternating in chapters and occasionally crossing over into each other. Because Eden knows Carla through her own work with the shelter she is the common theme running through each but I liked that I heard Carla’s voice too. She is a strong women with a sad history who is trying to rebuild her life – I admired her and wanted her to be happy and safe.

Each story could have probably been expanded into books in their own right but they did work well together and I didn’t find it distracting or difficult to move between the two. I did wonder if they would come together in a big twist at the end and was quite happy when they didn’t because I think that would have spoilt it and the conclusion to both was just right.

For me, it was much more satisfying than my first outing with Eden (and the first book to feature her) The Girls Next Door, where I struggled with some of the characters. Here, I didn’t have any of those problems so was able to settle in and enjoy the book and get to know Eden, who I think could become a firm favourite of mine – and not just because she wears doc martins (the best footwear ever) and drives a scooter (the coolest thing ever).

She is kind, caring, passionate about her job but there is a darker side too potentially, one that is hinted at when she and her daughter are threatened and I do wonder if that will come out in future books? There definitely seemed to be some teasers for what might happen next in her life in this book that I can’t wait to see develop.

I said at the beginning of this post that it was the tag line that caught my eye but it wasn’t the main or only reason. The other was Mel Sherratt, whose books I really enjoy and who is probably starting to rank as a favourite author. Her books have all the elements I love – crime, drama, twist, turns and strong female characters. They are well written, well plotted and keep me turning pages. I never know quite what to expect and I have – so far – always been pleased with what I’ve gotten. You can’t ask for more than that from an author or a book really, leaving me liking this one a lot.

Note: I received a copy of this book from the publisher via Netgalley in return for a fair and honest review.  All thoughts, feelings and opinions are my own.

Interested in what I thought about other Mel Sherratt books, check out my reviews below:

The Girls Next Door (Eden Berrisford 1)

8 thoughts on “Don’t Look Behind You by Mel Sherratt ”