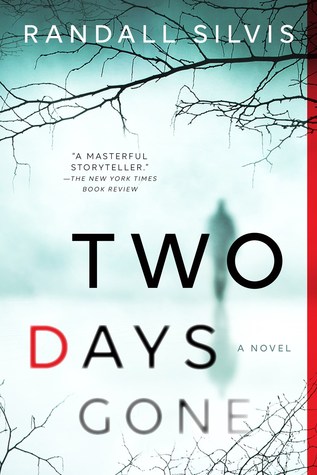 Thomas Huston, a beloved professor and bestselling author, is something of a local hero in the small Pennsylvania college town where he lives and teaches. So when Huston’s wife and children are found brutally murdered in their home, the community reacts with shock and anger. Huston has also mysteriously disappeared, and suddenly, the town celebrity is suspect number one.

Sergeant Ryan DeMarco has secrets of his own, but he can’t believe that a man he admired, a man he had considered a friend, could be capable of such a crime. Hoping to glean clues about Huston’s mind-set, DeMarco delves into the professor’s notes on his novel-in-progress. Soon, DeMarco doesn’t know who to trust—and the more he uncovers about Huston’s secret life, the more treacherous his search becomes.

Two Days Gone is one of those books that looks like it would be perfect for me on paper.  It starts with a brutal murder – always a good sign – and then goes straight onto the manhunt for the supposed perpetrator, the husband and father of the murder victims.  I say supposed because it isn’t clear he (Thomas Huston) is the killer and those who know him well say it isn’t in his character to have behaved in such a way.

Tracking him down is a detective that both knows and admires him, considers him as close to a friend as he has.  And that is saying something because DeMarco doesn’t have any friends, or family for that matter.  He is a man who lives alone and works alone and seems to do everything in his power to make people dislike him.  In Thomas though he had seen a kindred spirit, someone who maybe wasn’t as happy on the outside as he appeared.

This feeling seems to make it easy for DeMarco to decide Huston has killed his family, at least until the evidence stops adding up and he starts finding people lying to him everywhere he turns.  Determined to find the truth, he digs deeper into Huston’s life than he might otherwise, discovering secrets about his friend and author and also truths about himself.  It isn’t always pretty and I found both DeMarco and Huston hard to like as a result.

This dislike meant that I couldn’t root for either of them.  I do struggle when I can’t connect to characters and this was definitely the case here.  Their fates, which as a reader I should have been invested in, didn’t really mean much to me and,  as a result, I found I didn’t much care for the outcome of the story.  This is a shame and it wasn’t the case all the way through.  Initially, I was drawn in.  Both men have tragedy in their pasts and this made them vulnerable, characters I should feel for.

However, as the book went on I became frustrated with their behaviour.  I understood Thomas’ confusion at the beginning but not his actions at the end.  Silvas does his best to explain it but for me it didn’t fit with the picture of Thomas he had drawn.  I also didn’t understand DeMarco.  I got why he was angry, why he was a loner, but I didn’t understand why he didn’t act at certain points in the investigation, other than to keep the plot moving forward.

For me, it was the final third that left me disengaged.  Up until then, the story had alternated between DeMarco and Huston, with chapters focusing on Huston’s state of mind as he tried to make sense of what had happened.  It meant the plot slowly unfolded and there were twists and turns to keep me interested and turning pages.  Then Huston disappeared apart from as part of DeMarco’s story and the detective’s story was the only one I was reading.

I kept expecting to hear from Huston again and when I didn’t I felt disappointed.  The same was true of the ending which, for me, didn’t ring true.  Like I said earlier, this was a shame but for me this was a book that started well, showed promise but didn’t deliver.  I liked it but only a little – sorry!