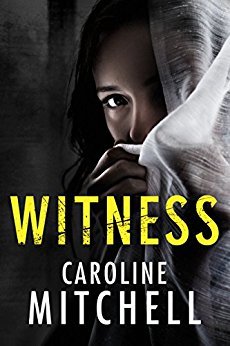 To Rebecca it was a brave decision that led to her freedom from domestic abuse. To Solomon it was the ultimate betrayal.

It’s been ten years since Rebecca’s testimony saw Solomon locked away. Enough time for the nightmares to recede, the nerves to relax; enough time to rebuild her life and put the past behind her.

Then one day a phone rings in her bedroom—but it’s not her phone. Solomon has been in her home, and has a very simple message for her: for each of the ten years he has spent in jail, Rebecca must witness a crime. And, to make matters worse, she has to choose the victims.

Fail to respond and you get hurt. Talk to police and you die. Ready to play? You have sixty seconds to decide…

As the crimes grow more severe, the victims closer to home, Rebecca is forced to confront a past she had hoped was gone forever.

After reading some really good reviews for Caroline Mitchell’s last book I couldn’t resit picking up a review copy of her latest novel, due to be released next week.

Witness starts with a bang – a dark room, a terrified woman, and a dead man lying on the floor – and it doesn’t really stop until the final pages, where Solomon (who has just spent ten years in prison for murdering said man) tries to exact his final revenge on Rebecca (his one time fiancé and one time terrified woman).

It’s a clever story, a twist on the domestic thriller, with Solomon determined to make Rebecca (or Becky as she is now known) pay for putting him in prison.  His approach is ingenious.  She will be a witness again, but this time, a silent one to increasingly violent crimes inflicted on people she knows and cares about.  Determined to keep her family safe, and unware of her past, Becky goes along with his demands, convinced she can find a way out.

However, as the crimes continue and escalate that way out seems harder to find and Becky, who is still fragile despite the new life she has built for herself, gets drawn in and becomes increasingly erratic in her behaviour.  As she does, Solomon, who seems omnipotent and always one step ahead, becomes more vindictive.  Page by page the tension increased to the inevitable confrontation.

I found myself turning the pages at a pace, needing to know what happened next.  I also wanted to know how Becky would find a way out and just how far she would go.  Which is where I have to say I had a slight problem with the book.  I know Becky wanted to save her family but as the crimes become more vicious I also wanted her be a human being and maybe do more to save the victims.  It meant that I wasn’t sure I liked her…and I wasn’t sure at times if maybe she and Solomon didn’t deserve each other.

What saved her in my eyes was her diary entries, which gave an insight into her life with Solomon and the abuse she suffered and which interspersed chapters told by Rebecca (in the fist person) and describing Solomon’s actions (in the third person).  It made her future actions make sense.  It also made me really dislike Solomon.  It was a good way to tell their story then and now and develop them as characters.  A couple of secrets revealed during the diary were really good ones and I didn’t see them coming.

Unfortunately, I did guess the ending – the final twist in the tale – though not till the last third.  I always hate it when that happens as I feel I am reading just to prove myself right. However, here it meant my opinion on the characters changed again and left me feeling a little more ambiguous about both Becky and Solomon as a result.

It also changed my opinion of the book.  Till then, I’d probably say I liked it.  It was well written and, like I said, a clever idea in a genre I read a lot (and can be hard to be original in I think).  Because of the way I felt at the end, however, I’m ending by saying I liked it a lot – a recommended read.

Note: I received a copy of this book from Netgalley in return for a fair and honest review.  All thoughts, feelings and opinions are my own.

5 thoughts on “Witness by Caroline Mitchell”

My Tweets
Note: I receive a small payment for purchases made through the amazon links at the end of posts. This does not impact my review of books - I will always say what I liked, loved and just didn't hit the mark. However, the payments help pay for me to buy more books - which is never a bad thing!
Back to top
Loading Comments...
Comment
×
<span>%d</span> bloggers like this: