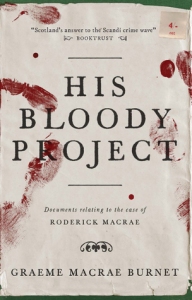 A brutal triple murder in a remote Scottish farming community in 1869 leads to the arrest of seventeen-year-old Roderick Macrae. There is no question that Macrae committed this terrible act. What would lead such a shy and intelligent boy down this bloody path? Will he hang for his crime?

After reading some great things about His Bloody Project I couldn’t resist picking it up when I saw it at the library.  Then I started reading it and wondered if I had made a mistake.  I struggled with the first thirty or so pages and was close to deciding it wasn’t the book for me.  Thankfully, something clicked before I gave up because this is a really good book and I really enjoyed it.

It starts with the author saying that this is the story of a relative of his, a young man convicted of murder named Roderick Macrae. Discovered in an archive and long forgotten, the author has found a handwritten record of the events leading up to the murder and the murder itself.  It is written by Roderick himself and, for a young crofter with limited education, shows an articulate and intelligent young man very aware of what has happened.

For me, as a reader, it also showed a young man pushed to the limits by bullying neighbours and the strict social structures in which he was living.  Roderick is also a boy who is suffering grief from the loss of his mother, regularly beaten by his god-fearing father, and trying to figure out how to become a man, including falling in love.  I felt very sympathetic to him and his situation and Burnet does a wonderful and realistic job painting this picture through Roderick’s words.

Then things start to change.  Following Roderick’s written statement there are autopsy reports, which paint a grisly picture; a paper and evidence from an expert who specialises in the criminally insane and isn’t convinced Roderick is telling the truth about his motives; and then a description of the trial itself, with neighbours giving testimony of a young man who was never “quite right” but who seemed completely calm and in control on the day of the murders.  All start to present a different version of events than those told by Roderick.

And as a reader, I then started to wonder.  Was he the victim he had led me to believe – in which case he was much smarter than his neighbours or the experts believe – or was he mentally ill with no real control over his actions?  It’s a difficult question to answer and I’m not sure I know how I feel now the book is finished.

I do know that I am really impressed with the book, after my initial reservations, how it presented the story, how it gave an insight into how mental illness was perceived and dealt with at the time, and how it developed the characters.  Burnet is a really good writer who completely drew me in.     As a result, I have to say I loved this book and would very much recommend it.

17 thoughts on “His Bloody Project by Graeme Macrae Burnet”