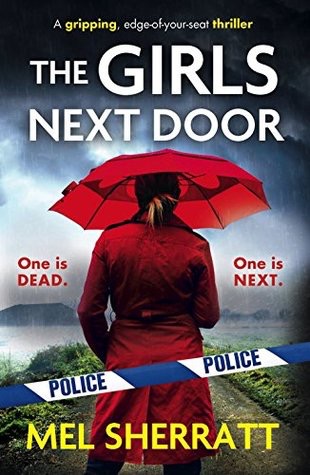 One warm spring evening, five teenagers meet in a local park. Only four will come out alive.

Six months after the stabbing of sixteen-year-old Deanna Barker, someone is coming after the teenagers of Stockleigh, as a spate of vicious assaults rocks this small community. Revenge for Deanna? Or something more?

Detective Eden Berrisford is locked into a race against time to catch the twisted individual behind the attacks – but when her own niece, Jess Mountford, goes missing, the case gets personal.

With the kidnapper threatening Jess’s life, can Eden bring back her niece to safety? Or will the people of Stockleigh be forced to mourn another daughter…?

The Girl’s Next Door has a shocking opening – a young girl is brutally murdered by a gang of teens.  Six months later, the teens are in prison, awaiting trial and another group of young women are being targeted, attacked on their way to meet friends in pretty viscous ways.  It’s an uncomfortable reading start that I have to say, one that drew me straight into the story and promised great things.

Adding to the tension is that one of the girls isn’t just attacked but kidnapped. And the question is why?  What did she do that meant she is now locked up in a room, bound and gagged?  It’s a question that Eden needs to answer – because the girl is her niece, Jess, and she is desperate to find her.  To do that, though, she needs to find the link – between the first murder, the attacks, and Jess’ kidnapping – and she needs to do it fast.

Or at least that is what you are led to believe, that everything that is happening is connected, until a twist in the tale blows that theory apart and you and Eden are left back at the beginning trying to figure out just why Jess was taken and if she will make it out alive.  It was a pretty clever twist I have to say and, whilst I had an feeling all was not as it seemed, I didn’t see it coming in the way it did.

By this point, I felt I had gotten to know Eden, her sister Laura and Jess and was engaged and involved in their story.  I liked Eden, and think she’ll be a great character going forward (especially if her ex-husband reappears, which suggests fireworks), and Laura, well written as a more than slightly hysterical mom who now regrets giving her daughter the freedom she did.

I didn’t like Jess though.  Yes, she’s 16 and a teenager so designed to be selfish but she has lessons to learned (her behaviour in a roundabout way led to her kidnapping) and I’m not sure at the end if she learnt them.   I also understand she was in danger and that the adults in her life wanted to get her back.  What I didn’t quite understand was how she came away pretty scott free in the end.  I didn’t like that either and, at the end, it did spoil the book a little for me.

Now, this is one of those things that is likely to not bother most people, and it’s a small thing for a book that was well written, with good pace and good characterisation (I’m not sure I was meant to like Jess for example), but it did bother me and I can’t help that.  I also have to admit that I did find myself comparing Eden to DS Allie Shenton from Mel Sherratt’s other books and I think I like Allie just a little bit more.  But then I’m three books in with Allie so more attached.

Will any of this stop me recommending the book? No, but with the caveat that the ending might leave you as frustrated as me.  Will it stop me buying the next in the series? No, I will definitely buy it because I want to see what comes next with Eden.  But did I love the book in the end as much as I have other’s of Mel Sherratt’s?  No.  I liked it but I disliked Jess too much to be pushed over the edge into really rating this one.  Sorry!

p.s. you can find my reviews of other Mel Sherratt books here:

12 thoughts on “The Girls Next Door by Mel Sherratt”