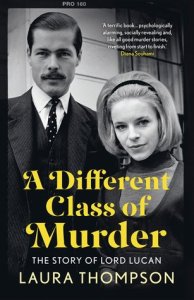 On 7 November 1974, a nanny named Sandra Rivett was bludgeoned to death in a Belgravia basement. A second woman, Veronica, Countess of Lucan, was also attacked. The man named in court as perpetrator of these crimes, Richard John Bingham, 7th Earl of Lucan, disappeared in the early hours of the following morning. The case, solved in the eyes of the law, has retained its fascination ever since.

Maybe it’s being a child of the 70’s but I have always been slightly fascinated by Lord Lucan and the fact that he disappeared so completely after so obviously (or so I thought) killing his nanny when he meant to be killing his wife.  Maybe it’s that his name still appears in the papers, magazines and books regularly as people try and figure out just where he went after that fateful night.

Whatever the reason for my fascination I’ve never not read an article I’ve come across but till now I’ve never read a book on the subject.  So, when I came across this at the local library and given my recent interest in reading true crime books I thought I would give it a go.  I can’t say it was the best decision I have ever made, though I did learn some interesting facts about Lord Lucan and understood a little more about him and his wife by the end of the book.

Why wasn’t it the best decision?  Because the book is long, it is overly wordy and it flits around so much that I struggled to keep the story straight in my head.  Tales of Lord Lucans of the past and their own misdeeds are woven throughout – this was confusing and, at times, didn’t seem to easily link back to the period in which the Lucan I was interested in way living or his actions (though I think that was the point).

It doesn’t help that Thompson uses language that is academic at times before slipping into a conversational tone and then back again.  Her sentences can be long and I found I was re-reading some passages just to understand exactly what she was saying…and when I did understand I’m not sure I exactly got the point.  It felt like she had so many facts, so much detail, had done so much research that she was determined to get everything in regardless.  A 100 pages shorter and this book might have been a lot more interesting.

The final thing that frustrated me is that, whilst I didn’t expect to get any closer to the answer, Thompson seems to have her own opinion on what happened but doesn’t want to just come out and say it so she skirts around it.  I wanted to either be presented with the facts to make my own decision or be presented with a scenario, an argument that I could either agree or disagree with.  I got neither.

It isn’t all bad, like I said, I did find out some things about Lucan I wasn’t aware of before and I did get a feel for the life he and his friends were living – one outside of that most people were living at the time – but it just feels like it could have been so much better.  A shame but I was left feeling deflated by the book and disappointed – not for me.

9 thoughts on “A Different Class of Murder by Laura Thompson”