Once again, I’m linking up again with Diane at Bibliophile by the Sea who hosts a post every Tuesday for people to share the first chapter / paragraph of the book they are reading, or thinking of reading soon. In really enjoy these tasters when I read them on other blogs so wanted to join in.

This week, after reading a lot about John Le Carre this last week or so, and realising I’ve never read any of his books, I’ve picked up Call for the Dead, the first featuring his most famous character George Smiley.  Here’s what it’s about… 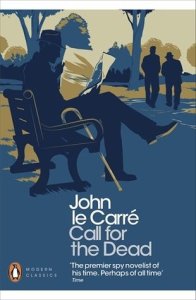 When Smiley finds Circus head Maston is trying to blame him for the man’s death, he begins his own investigation, meeting with Fennan’s widow to find out what could have led him to such desperation. But on the very day that Smiley is ordered off the enquiry he receives an urgent letter from the dead man.

Do the East Germans – and their agents – know more about this man’s death than the Circus previously imagined?

When Lady Ann Sercomb married George Smiley towards the end of the war she described him to her astonished Mayfair friends as breathtakingly ordinary.  When she left him two years later in favour of a Cuban motor racing driver, she announced enigmatically that if she hadn’t left him then, she never could have done; and Viscount Sawley made a special journey to his club to observe that the cat was out of the bag.

16 thoughts on “Tuesday Intro: Call for the Dead”