This week, I’m linking up again with Diane at Bibliophile by the Sea who hosts a post every Tuesday for people to share the first chapter / paragraph of the book they are reading, or thinking of reading soon. In really enjoy these tasters when I read them on other blogs so wanted to join in.

This week, I’m reading The Girl in The Spider’s Web by David Lagercrantz.  It’s the fourth book in the Millenium Trilogy (which I’m not sure should be allowed as the numbering messes with my mind).  I am quite nervous about this as I loved the first three books but with a different author.  I never normally read series that are taken over by other authors but this has good reviews and it was a present so I’m giving it a go. 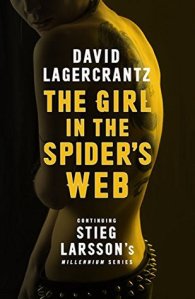 She is the girl with the dragon tattoo—a genius hacker and uncompromising misfit. He is a crusading journalist whose championing of the truth often brings him to the brink of prosecution.

Late one night, Blomkvist receives a phone call from a source claiming to have information vital to the United States. The source has been in contact with a young female superhacker—a hacker resembling someone Blomkvist knows all too well. The implications are staggering. Blomkvist, in desperate need of a scoop for Millennium, turns to Salander for help. She, as usual, has her own agenda. The secret they are both chasing is at the center of a tangled web of spies, cybercriminals, and governments around the world, and someone is prepared to kill to protect it . . .

This is how it starts…

This story begins with a dream, and not a particularly spectacular one at that. Just a hand beating rhythmically and relentlessly on a mattress in a room on Lundagatan.

Yet it still gets Lisbet Salander out of her bed in the early light of dawn. Then she sites at her computer and starts the hunt.

What do you think, would you keep reading?

23 thoughts on “Tuesday Intro: The Girl In The Spider’s Web”