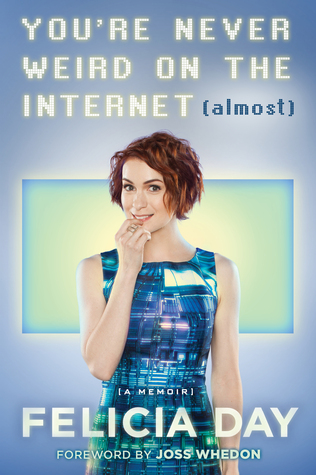 After reading Felicia Day’s memoir, You’re Never Weird on the Internet (almost), I have the OVERWHELMING desire to type in capitals (which is something I NEVER do) because this is how Day writes and it’s slightly contagious, as is her positive attitude and outlook on life.

As a result, I was SLIGHTLY in love with her by the end of the book and DEFINITELY want to be her friend (not just one of her 20 million twitter followers, which I’ve been for  a while). I also want to quit my job, throw caution to the wind, and start doing something I love instead of just something that pays the bills – which is what Day did, sort of, because hers is very much also a caution to the wind type of life.

Home schooled, along with her brother, by an unconventional mother who tried to follow the curriculum before GIVING UP and letting her kids learn naturally, the result was Felicia became really good and Math and Violin (which seems a PERFECT match), getting into college early, but had no friends other than ONLINE.  This was the early days of the internet and chat rooms were new, as were the games Felicia and her brother played.

It was the start of a lifelong love affair with the internet, online gaming and Felicia’s need to connect online, all of which came in really useful when she decided that rather than play one more bit-part secretary, she would start her own web series, The Guild, making her a star in one small (or large as it’s the internet, which is basically HUGE) corner of the universe – someone people knew as more than the geeky redhead from Buffy and Supernatural (which, if I’m honest is how I knew her *shame-faced*).

The book is ROUGHLY in three parts – the home schooling / college years, The Guild years, and then the post-Guild years take up the last third.  After all the success they were rockier than Day maybe anticipated but also written with incredible HONESTY which as they touched on mental health issues and this is an area I work in, I really appreciated.

Woven throughout is Felicia’s love story with the intranet, which changed her life, a fair dose of feminism (because gaming is by all accounts a “man’s world”), and a lot of funny – this book made me LAUGH!. By the end I felt I had been on a bit of an emotional roller-coaster but I have to say I really enjoyed the ride.  I also felt inspired.  I may not be quite ready to quit my job and move to Hollywood but I do feel like life should be about taking more risks than I ever do so you never know…

p.s. If you hadn’t have guessed, I would definitely recommend the book – loved it!.

Find on: Amazon UK / Amazon US