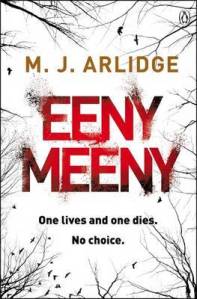 So, I’m rather behind in this series of books featuring Detective Inspector Helen Grace – four books behind I think.  In fact, I have to be honest and say I hadn’t heard of them until seeing a review of the latest on Debbish.com.  After that, I seemed to see the posters everywhere – and so, spurred on, I went and got the first book – Eeny Meeny – from the library.

I’m really glad I did, although it’s quite a dark book.  Helen Grace is a complicated character and not a particularly nice one.  She has, it turns out as the book progresses, got lots of baggage and her ways of coping aren’t ones most people would look to.  Still, by the end, I couldn’t help but like her. She is loyal to her team and knows how to say sorry when she messes up.

The story is just as dark as Helen herself and quite clever I thought.  There is a serial killer on the loose, a female.  This in itself is unusual but her method of killing is stranger still, because she doesn’t actually kill anyone.  Instead, she kidnaps two people, locks them in a room with no food and no water, just a gun with one bullet in it.  Their choice is for one to kill the other so at least one survives or for them both to die.The question for the survivors is whether being alive is the better option.

And the question for Helen is why?, especially when she realises that she knows nearly one of each pairing.  There has to be a link to her past but what is it?  This, for me, was the only part of the book that disappointed me a little.  Not the final reveal of who the killer was but that, after building up the tension for the most of the book and it being a real cat and mouse game, Helen seems to figure it out within a few pages, without the help of her team.  A team that had been involved all the way through.  I felt it was a bit of a cheat.

Overall though, it didn’t take away from my enjoyment of the book.  It was well written and a real page turner. I thought it was a clever idea for a story and the plotting (other than the little bit I just mentioned) was well done, with some great twists and turns and red herrings.  For the starter to a series, the characters were well drawn and interesting and I am looking forward to see how they develop going forward, especially Helen given the ending.  Definitely worth a read – I liked this a lot!