Morning all, I hope everyone who celebrates the 4th had a good day yesterday. With my husband been from the States we did a BBQ but did miss out on fireworks. Still, the sun was shining so we couldn’t complain. In fact, the weather has been gorgeous all week, as it should be in June, so it wasn’t our first cook out and won’t be our last I’m sure.

Book wise this week, I finished (and reviewed) Bradstreet Gate by Robin Kirman, which I loved, and The Boy Who Could See Death, which I didn’t. I also finished The Girl in the Red Coat by Kate Hamer (link to Goodreads) which I will post a review on this week. Currently I’m reading Silent Scream by Angela Marsons, which I’m enjoying.

Five figures gather round a shallow grave. They had all taken turns to dig. An adult-sized hole would have taken longer. An innocent life had been taken but the pact had been made. Their secrets would be buried, bound in blood…

Added to the shelves was Blood Sisters by Graham Masterson, the fifth in the Katie Maguire series (I still have the fourth to read but this was 99p on Amazon so couldn’t resist). 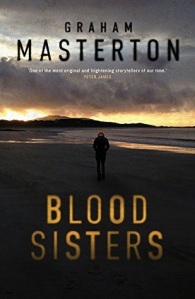 In a nursing home on the outskirts of Cork, an elderly nun lies dead. She has been suffocated. It looks like a mercy-killing – until another sister from the same convent is found viciously murdered, floating in the Glashaboy river. The nuns were good women, doing God’s work. Why would anyone want to kill them? But then a child’s skull is unearthed in the garden of the nuns’ convent, and DS Katie Maguire discovers a fifty year old secret that just might lead her to the killer… if the killer doesn’t find her first.

I also picked up Hidden by Catherine McKenzie for 99p too, a book I’ve heard good things about.

While walking home from work one evening, Jeff Manning is struck by a car and killed. Two women fall to pieces at the news: his wife, Claire, and his co-worker Tish. Reeling from her loss, Claire must comfort her grieving son as well as contend with funeral arrangements, well-meaning family members, and the arrival of Jeff’s estranged brother, who was her ex-boyfriend. Tish volunteers to attend the funeral on her company’s behalf, but only she knows the true risk of inserting herself into the wreckage of Jeff’s life.

And that’s it for this week. What have you read, or are you planning to read?

This week, I’m linking in with Kimberly at the Caffeinated Book Reviewer and her Sunday Post. Head over to see what other bloggers have read, written about or just added to their shelves.