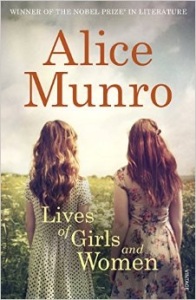 The first thing that struck me about Lives of Girls and Women was that, despite being described as a novel, it is more a collection of short stories, each written from the perspective of one central character, Del Jordan. Each chapter is a story and each story a snapshot of Del’s life as she moves from child to teenager to young woman.

The second thing was that, despite having been written in 1971, this book felt very fresh and modern; the issues it touchs on – around what it’s like to grow up female and the perceptions of what women should and shouldn’t be – still seem as relevant now as they were in the 70’s when the book was written or the 40’s when it was set.

The book opens with Del as a child, living with her family on the their fox farm at the end of a long country road in rural Ontario, a road that is otherwise home to some less than salubrious types.  The first story isn’t so much about her, though, as it is her Uncle (who isn’t an uncle) and his sudden and unfortunate marriage to a young woman who already has a little girl.

Del see’s things from the perspective of a child and just how much she doesn’t understand is evident in her description of events.  As a child, she takes things at face value and accepts what adults tell her. With each story, as she gets a little older, she starts to see things more as they are and question those around her. She also continues to misunderstand a lot of things and make mistakes. That though, is growing up, and Del’s behaviour felt real to me and age appropriate – I liked that she wasn’t written as wiser than her years.

Told in the first person, you get to see how Del changes and becomes her own person and how she relates to and is shaped by the two most important people in her life, her mother and her best friend Naomi. Both are almost polar opposites of each other. Naomi is a traditional girl, growing up with local prejudices and wanting nothing more than to fill her hope chest and get married. Her mother wants more for herself and for Del than being a wife and mother. She goes to live in the town, leaving her husband on the farm, and earns her own money by travelling the country selling encyclopaedias.

All three women feature prominently in each story and this a very female centric book. The first story is the only one where men are at the centre of the narrative. In all the others they are there as caricatures almost, representing certain character traits or attitudes, none of which are particularly attractive. The men come across as weak, sneaky or controlling. Even Del’s father and brother, who appear in every story, are never front and centre but floating around in the background.

The mother is an interesting character. The result of an unhappy childhood she is now an unhappy adult who feels that life should be more than it is.  In each story, you see her trying to make more of herself, and her children, especially Del who she believes can achieve great things.  To me, she is a woman living in the wrong time and I had a lot of sympathy for her when her attempts to change her life didn’t always go to plan. I also admired her for standing up for her beliefs.

Del has a love / hate relationship with her mom. At times she seems to understand her but most times she is slightly embarassed. Yet, to me, she was her mother’s daughter in many ways, not quite fitting into the small town of Jubilee and wanting more from life. In many of the stories she is searching for answers – on friendships, love, sex, and religion. All things I think most people wonder and worry about at some point and I could see the teenage me in Del at times.

I like that Alice Munro doesn’t over sentimentalise any of the issues or the answers. In places, the book actually felt more like a memoir than a piece of fiction. The way it is written seems so straightforward but, when I sat and thought about what I’d read, it was much more complex and layered. This made it a book I really enjoyed reading, with characters I related too, and a book that I think will stay with me for a while yet. I will definitely be reading more Alice Munro.

13 thoughts on “Lives of Girls and Women by Alice Munro”