Morning all. Welcome to the first Monday in February – how did we get here so fast? On a plus note, it does mean we are one month closer to warmer days and longer nights.

As it’s Monday I’m joining Sheila and a lot of other bloggers over at Book Journey, for her weekly meme, It’s Monday! What Are You Reading?

This week, I will be listening more than reading as I have a week of time away from home and, now I’ve gotten the hang of audiobooks, they are one of my favourite things about car journeys.

First up is The Mistress’s Daughter by A. M. Homes. This is a memoir. I love her books so thought it would be nice to know more about what sounds like an interesting life. 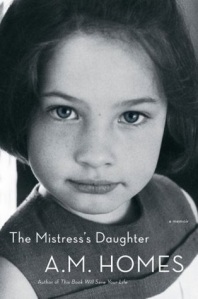 On the day that Homes was born in 1961, she was given up for adoption. Her birth parents were a twenty-two year old woman and an older married man with whom she was having an affair. Thirty years later, out of the blue, Homes was contacted by a lawyer on behalf of her birth mother and they began to correspond; her biological father contacted her soon after. These two individuals and their effect on the adult Homes are strange and unexpected and the story spirals into something utterly raw and hilarious, heartbreaking and absurd. Along the way, Homes describes the clash between her childhood fantasies of her birth parents and the disappointing reality.

The other audiobook on the stocks is Sister by Rosamund Lupton because I remember being told forever ago it was a good book and I’ve never read it.

When Beatrice receives a call to say that her sister, Tess, is missing, she boards the first flight home. But as she learns about Tess’s disappearance, she is stunned to discover how little she actually knows of her sister’s life. Everyone around her accepts they have lost Tess, but Beatrice refuses to give up, embarking on a dangerous journey to discover the shocking truth, whatever the cost…

For the non-travelling part of my week, I have Harry’s Last Stand which I bought last year. With the what seems like never ending electioneering going on at the moment, it felt like the right time to read it and remind myself of just what is at stake. 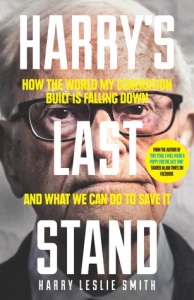 ‘As one of the last remaining survivors of the Great Depression and the Second World War, I will not go gently into that good night. I want to tell you what the world looks like through my eyes, so that you can help change it…’

In November 2013, 91-year-old Yorkshireman, RAF veteran and ex-carpet salesman Harry Leslie Smith’s Guardian article – ‘This year, I will wear a poppy for the last time’ – was shared almost 60,000 times on Facebook and started a huge debate about the state of society.

Now he brings his unique perspective to bear on NHS cutbacks, benefits policy, political corruption, food poverty, the cost of education – and much more. From the deprivation of 1930s Barnsley and the terror of war to the creation of our welfare state, Harry has experienced how a great civilisation can rise from the rubble. But at the end of his life, he fears how easily it is

And that’s it for me. Three books, I’m discovering, is the most I can get through if I’m lucky and if I want to remember what I’ve read! Hope you have a good reading week too.