Recently, I came across a great little short story from (where else?) my local library. With it being a short story, a review didn’t seem in order but I really enjoyed it so thought I would do a quick post as a recommendation. If you have half an hour or so to spare and want something light-hearted to take up the time, you wouldn’t do to badly with this. Even better, try to get the audio version, which is narrated by Judi Dench. 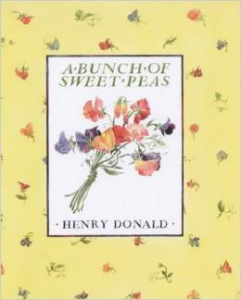 A bunch of sweet peas is the story of a national sweet pea competition hosted by the Daily Mail in 1911. And it really doesn’t seem like it could take place in any other time. It’s a really sweet tale (pun intended) and a very simple one.

A newly wed living in a small Scottish village is convinced by this part-time gardener to enter the competition. Although he doesn’t think he has a chance of winning, he gets drawn in, worrying about his plants and whether they will survive the sudden heat wave that has hit the country. First prize is a £1,000. Second £50. It’s second he would like to buy a new alter for the church. His wife would like £50 too; their house is bare as they are just married. Some furniture and curtains would be nice. Thanks to the rules, they can both enter.

They aren’t the only ones thinking how nice the money would be – it was an extraordinary amount back in the day (heck, I wouldn’t mind a £1,000 now either). Over 15,000 people applied for the competition, causing a logistical nightmare for the postal service and a full days worth of judging for the paper. Everything was carefully planned as box after box of sweet peas arrived at the Alexander Palace.

How much effort it takes to grow what seems like such a simple plant fascinated me and just how simple the whole idea was but how it swept the nation was wonderful to read. And then, of course, there was the will they / won’t they win question – I won’t give the answer here but you can probably guess.

The audio recording I listened to was 40 minutes long (I think the story is around 50 pages) and it flew by. Loved it!

One thought on “A Bunch of Sweet Peas by Henry Donald”