Over the last few weeks, I’ve been reading books that take a bit of brain power. I love a book that makes me think but,as I sit here on Sunday afternoon, thinking about finishing Colorless Tsukuru Tazaki and His Years of Pilgrimage, I’m wondering if I need a few lighter reads this week. So, whilst I’m not 100% as to whether I will read all three of these books, they are ones on the top of the pile.

The Burning Air By Erin Kelly because I’ve read her other novels and loved them. 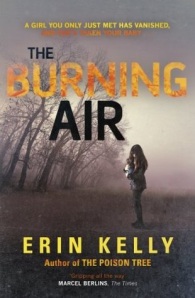 The Blurb:The MacBrides have always gone to Far Barn in Devon for Bonfire Night, but this year everything is different. Lydia, the matriarch, is dead; Sophie, the eldest daughter, is desperately trying to repair a crumbling marriage; and Felix, the youngest of the family, has brought a girlfriend with him for the first time.

The girl, Kerry, seems odd in a way nobody can quite put their finger on – but when they leave her looking after Sophie’s baby daughter, and return to find both Kerry and the baby gone, they are forced to ask themselves if they have allowed a cuckoo into their nest…

One Summer: America, 1927 by Bill Bryson because, again, I love his books and – as I’ve now owned this one almost a year – I’m starting to feel it has been neglected. 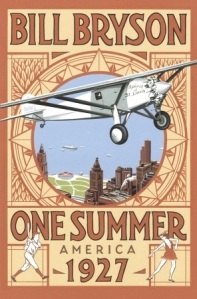 The Blurb: In the summer of 1927, America had a booming stock market, a president who worked just four hours a day (and slept much of the rest of the time), a semi-crazed sculptor with a mad plan to carve four giant heads into an inaccessible mountain called Rushmore, a devastating flood of the Mississippi, a sensational murder trial and a youthful aviator named Charles Lindbergh who started the summer wholly unknown and finished it as the most famous man on earth (so famous that Minnesota consider renaming itself after him).

It was the summer that saw the birth of talking pictures, the invention of television, the peak of Al Capone’s reign of terror, the horrifying bombing of a school in Michigan by a madman, the ill-conceived decision that led the Great Depression, the thrillingly improbable return to greatness of a wheezing, over-the-hill baseball player named Babe Ruth and an almost impossible amount more.

And finally, The Woman Who Gave Birth To Rabbits By Emma Donaghue, another author I really like, this book sounds fun and interesting. This is an audiobook for another long day on the road later in the week.

The Blurb: Resurrecting buried scandals, audacious hoaxes and private tragedies, Emma Donoghue has written a sequence of short stories about peculiar moments in the history of the British Isles. Here artists mix with poisoners and countesses rub shoulders with cross-dressers, vicars and revolutionaries; the Second Coming is proclaimed in Scotland; and a miniature girl becomes a tiny skeleton in a London museum.

As with last week, I’m linking in with Sheila at Book Journey, who has a weekly post I’ve enjoyed following – It’s Monday! What Are You Reading? Click on the link to find out what Sheila and other book bloggers are reading.